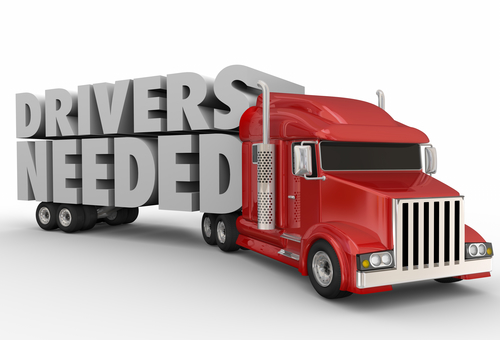 Drivers Needed words on a semi truck trailer to illustrate a job shortage in trucking, transporation and logistics carrier companies

For the first time U.S. trucking companies and other industry stakeholders recognized an increasing lack of truck drivers to be one of the most serious concerns facing the industry. The American Trucking Associations (ATA) estimates the current deficit at 48,000 with the total rising to 175,000 by 2025.

The driver shortage passed last year’s number one concern- on its rise to the top, – and five other industry issues that were seen as more important in the survey of last year.

The data which reported on Monday by the American Transport Research Institute and are based on 1,557 respondents representing industry stakeholders of the U.S., Mexico as well as Canada.
Respondents were asked to mention their top three concerns and weighted scores were given an index value based on the total scores. It is to be noted that over half of the respondents represent the carriers and more than a third represent commercial drivers.

39 % of the respondents mentioned that their most concerning issue is the driver shortage. The survey results indicated that more than a quarter of all drivers are 55 or older. Moreover, a total of 890,000 drivers will be needed just to keep the current workforce.

Is it even believable that the industry can attract that many new drivers? Particularly at an average salary ranging between $35,000 to $45,000 for a job that requires drivers to spend days or weeks away from home and is really exhausting? That may not even be the worst part.

Last December “Artificial Intelligence, Automation, and the Economy” titled report was published by the Obama White House.” It is no longer accessible at the Whitehouse.gov website, but an archived version is available.

There were about 1.7 million U.S. heavy and semi-truck drivers in 2015 according to the report. The study indicated that between 1.34 million and all 1.7 million jobs are endangered by self-driving trucks. The report noted that the change “may take years or decades to occur because there will be a further lag between technological possibility and widespread adoption.”

Goldman Sachs Economics Research said that as many as 3.1 million U.S. truck driving jobs (all sizes, not just big rigs) are at risk from self-driving trucks In April. That’s about 2% of all U.S. jobs.
Tesla, Uber and Germany’s Daimler are all working on driverless big rigs. Daimler even took its vehicle for a test drive on the Autobahn in October 2015.

The trucking industry needs a comparatively short-term fix like, say, offering higher pay. Over the longer term, as driverless vehicles are added to their fleets, they’ll be able to stabilize those higher temporary costs with the savings they expect from having self-driving vehicles.

What are the Levels of DOT Inspection and Recommendations for Success?

Free Health Screenings and More Available at GATS: Check Out the Offerings