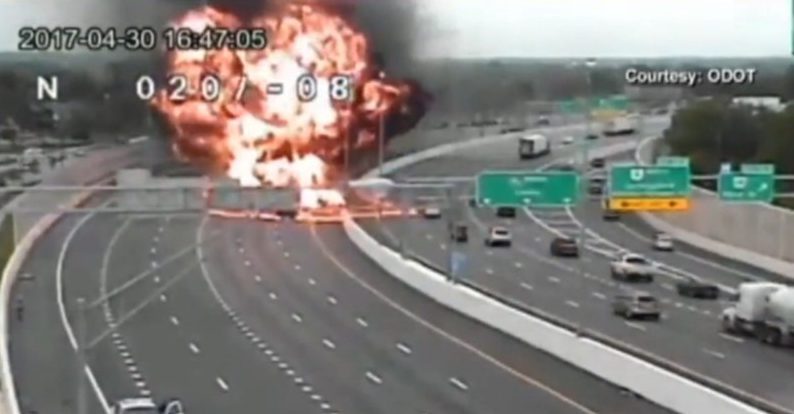 Reconstruction is still in process due to fiery crash on I-75. The collision took place between a car and a tanker which was full of gasoline. The reason of the crash was the car travelling in the wrong direction.

Repairs on the road are estimated to continue through Thursday. They began on Monday where crews worked to clean up the fallout of the collision.

Andrew Brunsman, a 30 year old male was identified as the driver of the car. He was from Beavercreek and was pronounced dead in result of the collision. The driver of the tanker on the other hand suffered minor injuries. The crash occurred around 4:41pm. The sky was filled with black smoke and there was flames all around the crash site. This fiery scene lasted for about an hour.

The number one concern was putting out the fire. Once that situation was under control the reason of concern switched to the damage done to the highway. Another major reason for concern was the gasoline filling the sewer system.

The collision, along with the explosion was captured on the Ohio Department of Transportation cameras.

A small, light-colored vehicle travelling the wrong way on southbound I-75 is shown on camera. We see the car travelling in the fourth lane. The we see it going around a curve and passing the southbound entrance ramp from Main Street, BAM, it collides with the tanker truck.

The video fails to make it clear in terms of what lane the tanker was in prior to the collision. The truck driver escaped the wreckage and ran across the highway lanes before the rig exploded.

The investigation remains in progress. A crash reconstruction unit, evaluation of physical evidence and interviews with witnesses are still incomplete and may even take several weeks to complete.

Any witnesses who have not yet come forward are advised to do so. They should call Detective Derric McDonald at 937-333-1141.

All but two lanes of the highway were reopened by Monday morning, with traffic shifted to the right.

ODOT officials said there was no structural damage to the highway, and they were working quickly to replace pavement damaged.

“Just the extreme heat from that crash and that fire, that can do a lot of damage even to pavement, and so they have to go in where places are possibly crumbling, and they want to go in and remove that damaged pavement,” said Mandi Dillon, public information officer for ODOT.

There is no estimate for how much the repairs will cost the state, which finished a complete rebuild of that section of interstate just last year.

“Hopefully by Thursday morning rush hour, their goal is to have all three lanes of southbound open again and then at that time the ramps from Route 4 to southbound and Main Street to southbound would reopen as well,” Dillon said.

The inside shoulders, both northbound and southbound, will remain closed for some time until repairs can be made. Those repairs will likely be made using nighttime lane closures in the future, Dillon said.

The Ohio EPA said workers found no continuing danger to the adjacent McPherson Town Historic District, where neighbors the day before had witnessed smoke pouring from storm drains and been told to call 911 if they had fumes in their homes.

“The fire (in the sewer system) was extinguished before the fire department departed the scene yesterday,” Dina Pierce, media coordinator for EPA Southwest District. “The fire department also flushed the storm sewers to push out the gasoline.”

Overnight, an environmental contractor ventilated the storm sewers, and that contractor will continue to do air monitoring for fumes, she said.

The city’s drinking water sources were not affected, Pierce said.

Water levels in the river were high from weekend storms when the crash occurred, so the storm sewers shouldn’t have discharged much.